The death and last day of Apostle Joseph Ayo Babalola of The Christ Apostolic Church was a unique and most glorious to behold in the life of every genuine Christians. He fought the good fight, kept the faith and the final drop his warfare praying sword and righteous helmet of great exploit at the feet of his master; our Lord Jesus Christ.

The encounter of his death and his last few words your are about to read was unveil by one of his fellow ministers of the Lord in same ministry. Who was a companion and fellow soldier who stood beside our dear beloved Pa Apostle Joseph Babalola.
HOW APOSTLE AYO BABALOLA DIED.
Until his sudden departure to glory on Sunday, July, 1959, Apostle Joseph Ayo Babalola showed no sign of illness. On Friday 24 July, he returned to Ibadan to attend the general council’s meeting slated for that day. On Saturday morning, July, Apostle Babalola conducted the Morning Prayer for ministers and members living in the residence of Christ Apostolic Church; Olugbode, Ibadan and prayed for everybody.
The same day, he sent two of his followers, Michael and another fellow to me at Ede that I should prepare a place for him to sleep. I never knew he was talking of his final sleep. Apostle Ayo Babalola arrived Ede around 6:30 pm in the evening that Saturday and he was gladly received. Before his arrival, I had prepared my bedroom ready for him.
We ensured that nobody was allowed to rush into the bedroom with him; for it was Apostle Babalola’s habit that he never turned away anybody who came to him for prayer and counseling, no matter how weary he might be. After prayer, I informed him that his meal was ready. He declined to take any meal but requested to be allowed to have some sleep, because he had been holding series of meetings since the past nine days with little or no rest.
He woke up three hours later and took some tea and slept off again. At 4 a.m. on Sunday, he woke up, took his bath, took some tea and had his morning meditation without any disturbance. At 6 o’clock, I went to him in the bedroom and he began to talk about a great convention which will soon be held at his hometown, Odo-Owa.
He was speaking in parables, so I did not suspect that he was talking about his approaching death. He directed me to call in Prophet Babajide who was in the adjacent room. Both of us knelt down beside his bed and he began to narrate to us how he began his ministry. It was such a sublime experience. Both of us just listened; we did not utter a single word during the course of his narration. After this, we knelt down for prayer. The three of us prayed. I took the lead. Prophet Babajide followed.
When it was Apostle Babalola’s turn to pray, he prayed for a very long time, praying for the church, the leaders and for us too. After the special service, people came to Apostle Babalola in my bedroom and bid him farewell before leaving for their various destinations with joy and humor.
He bid everyone farewell and prayed for them. Nobody suspected through his speech or action that death was lurking in the corners. We left him alone to attend to those who were waiting to see him.
Meanwhile, Michael Osabi and Samuel Oluwatusin, the two young men who used to wait on him, remained with him as he took a nap. When he woke up, he called me and returned my covering-cloth to me. His action surprised me and I asked, “Baba, why are you doing this?”
He replied, “A man should sleep with his own clothes.” It did not occur to me that he was speaking of his imminent death. He advised me to go and have some sleep myself. By then, everybody else had gone to church for the evening service.
Around 5 p.m. as he lay on the bed, Apostle Joseph Ayo Babalola breathed heavily three times, saying after, “in the name of the Father, and of the Son, and of the Holy Ghost.” His breathing was like the rumbling of a rain-storm and there was a great vibration in the bedroom. As this was happening, his personal attendants (Michael and Samuel) ran to call me to his bedside before he gave up the ghost. We began to pray and quickly sent for the church leaders who had gone to church for the evening service. 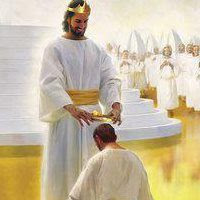 We all prayed for his restoration. But while this prayer was on, the Lord opened my spiritual eyes to see what was happening in the heavenlies. The heavenly hosts had come to meet this great prophet and joyfully admitted him into the glory above.

He had laid down his sword at Jesus’ feet. So he could not return to earth again. The church leaders and the elders who were present arranged for Apostle Babalola’s corpse to be taken to Efon-Alaaye that same night.