This confession is the 5th and concluding part in of the five volumes, from the excerpt testimony of brother Augusto Quiala Maquengo, a former servant and dedicated son of the Lucifer. To fully benefit from it, you need to read the remaining other parts in numerical order.
THE COMING OF OUR LORD JESUS CHRIST – VISIONS OF THE RAPTURE

After the experience the experience i encountered in the 4th series, I had so many visions and revelations about the coming of the Lord. Recently, I have had many rapture dreams and I very sure that the Lord will appear in the clouds of heavens at any time now. I will tell two of them.

1. 1st Vision: I saw an angel who told me, go and read Zachariah Chapters 6 and 9. When I picked it to read I discovered that there were four angels in the four corners of the earth ready to blow the trumpets. So when I woke up and checked the scriptures, it was exactly what I saw in the dream. 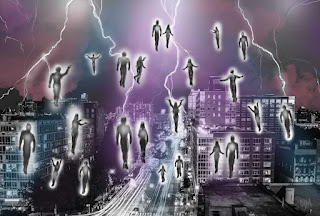 So brethren, many other sisters and brothers in Christ have had similar rapture revelations and our God does not lie, His word will come to pass soon. We don’t know whether we will even finish this year, so dear reader, get ready and surrender. Satan is so evil and cunning. He does not love the human race, so don’t be a fool to stay and face him at all. He is so wicked and has only evil intentions.

2nd Vision: At about 00:50am of 11th of April 2011 while sleeping, I had a dream where I was standing outside a building I saw a huge white horse full of light and glory and power which came down from heavens to fetch me. When the horse landed I was instantly changed into my spiritual glorified body and was fetched by the angel. 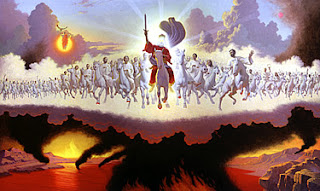 This daughter started asking me: why was I not ruptured? Why? Why? I repented and was waiting for the Lord, I gave him my life and now I am left behind. She was complaining bitterly and I in my spiritual body floating landed beside her and told her: I think that you did not surrender yourself very well to the Lord, though you say that you did repent. I think you left or ignored to well check certain areas of your life. Check again your life and I am sure you will find some part where you did not repent well or you left unattended.

“I started telling her that she now had the Only Last Change To Never Accept The Mark Of The Beast, Remain Faithful With Christ Again, And Though She Will Be Tortured And Cut Bit By Bit, They Will Cut Her Hand Bit By Bit Or Plug Her Eyes Alive, May She Never Accept The Mark Of The Beast. I Told Her: It Is Better To Support The Suffering Of The Torture, Though It Will Not Be Easy, Than Going To Hell For Eternity With The Mark” 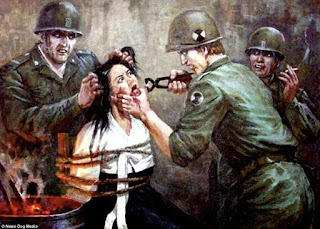 When I said this, I felt as if I was told to get going up. I had my full senses so vivid. I went to join the big, big queue of so many, but so many Christians going to heavens I bid farewell to her and started flying up. In the same vision, the Lord commissioned me and another Christian brother who also had received the resurrected body to go and deliver a letter to the CEOs and Presidents of certain multilateral banks (identity hidden by instructions of the Holy Spirit) and I flew with this brother I never knew while on earth, but I was very happy to be with him.
READ  Demon Incarnates Exposed
Powered by Inline Related Posts
In this process while in my spiritual body, I found myself standing in a hall room of a certain President of a Multilateral Bank who I warned to never eat or drink the food he will be offered in the ceremony he was going to deliver a speech (I understood the food here to be the deception words from the orthodox spiritual leaders of the lukewarm churches). His own guards had forgotten to warn him, but I did.
He went to this ceremony and when he came back by emergence, looking like the ceremony was interrupted because of the chaos that the rapture brought to the world. It was such a chaos that this President of a Bank started tearing down certain decrees and laws he had approved during his rule and saying: now I authorize people to go to their home countries and apply to become prime Ministers or ambassadors as they wish with the experience from this bank. 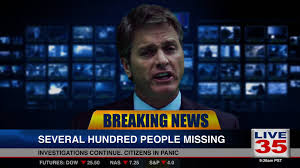 It looked like as though this president had no more desire to live and was so perplexed with the events that took place. I and the brother who were sent there suddenly received a letter which seemed like coming down unto our hands from heavens but written with a very beautiful angelic handwriting with ink of blood (I perceived this as the blood of the Lord Jesus Christ).
The letter was addressed to Bishops of orthodox and conservative lukewarm churches who had made compromise with the Presidents of this world in exchange of favor, money and reputation to make ends-meet in this world. When I received the letter while in my spiritual body, the president of this bank was there (it seemed he was representing all the presidents) and there was also an elderly Bishop who was representing all bishops of orthodox and conservative churches that were lukewarm.
READ  The Confession Of An Ex-Notorious Arm Robber-Shina Rambo
Powered by Inline Related Posts
I started reading the letter before his face and the President of the bank. The handwriting in blood read like this (from what I can remember, not in chronological order but the words I can see even now from the blood letter):

“Bishops And Spiritual Leaders, The God Of All Gods Of Heavens, Says: You Knew Well My Word, You Were Taught Very Well And You Were Teaching Others. Your Status And Positions Of Influence Corrupted You And You Dropped Me Out My Words Of Truth To Prefer Goods, Favors, Money In Exchange Of My Ways And My Words. You Made My Ways Look Weak, Favorable To World Leaders And With No Value; Instead Of Following It Faithful. Oh, Leaders Woe Unto You, That Now You Were Left Behind Because You Failed To Follow Me Faithfully”

As I was reading the letter to this spiritual leader who was representing all left behind Bishops and conservative or traditional churches that were LUKEWARM, this Bishop or Reverend with a long gown and chains of gold with big cross on his chest, started shouting: NO, NO, NO; THAT CANNOT BE POSSIBLE, IT CANNOT BE, NO, DO NOT SAY THAT AGAIN.
His heart was failing him while he was saying this. On the sofa he was seated, he was holding his heart on his chest so hard like somebody getting a heart attack. I insisted by telling him: “Yes, You Preferred Pleasure Than Our God, You Preferred To Receive Riches, Goods, Favors And Money Than To Say The Truth, Now You Were Left Behind. What Will You Do?”
While I was speaking, the President and CEO of this multilateral bank, said: “Yes, We Favored You Leaders Of The Churches Indeed, But You Did Not Preach To Us The Truth As It Is” This is exactly how the Laodicea Lukewarm church was warned by the angel in the book of Revelations.

Then by those words of the leader, I took the letter from the hands of this orthodox spiritual leader and started tearing piece by piece and I throw it onto the face of this spiritual leader and I held the hand of my Christian brother who was in the resurrected body with me and we started flying high, very high, insight what seemed a golden big, high, but very high building that led towards heavens.

While we were flying in our beautiful glory and light covered bodies, I was thinking to myself, when will we arrive in heavens? We were going and going up and up and it seemed very far but we could see the building which looked like a big tunnel to heavens as far as towards heavens. I started thinking how I could find the gardens of the paradise, its beauty and so on, and then I woke up from sleep. The end of the dream. 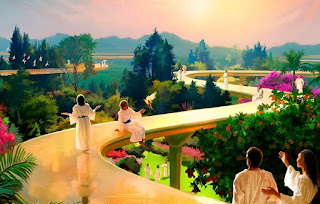 Brethren, are you ready for the Eminent Rapture? It is so near that many are ignoring his call because they wish to build houses, finish university courses, have children on earth and have a career. Some even tell me that their destiny must be accomplished yet. Some say that the Lord promised them several things and before they are accomplished the Lord cannot rapture the Church. Let me surprise you: most of promises of the Lord for you are eternity bound.
READ  The Death Of Apostle Joseph Ayo Babalola Of Christ Apostolic Church
Powered by Inline Related Posts
This means that in heaven many will be surprised when the Lord will present to them what he promised them in full measure for them to enjoy for eternity. Mark my words and believe the Lord to accomplish your desires in the eternity, which is better than staying any minute further in this evil, doomed and decaying world.
Indeed, our God is Alive and He is Powerful. We will conquer all the time with Him and in Him forever and Ever. I love the Lord so much that I have no more desire to be in this earth anymore. Right now, I am home sick and all I want is to see my Lord whom I desire so much.

Unfortunately, the power of mere words that constitute human speech cannot express the strength and depth of my love, passion, hunger and thirsty for Him. God bless you as we surrender to, and prepare ourselves for Him, forever until the Rapture (The End).

CHARLES G FINNEY :HOPE FOR A MURDEROUS GANGSTER
AIDAH NNAKASUJJA: A TASTE OF HEAVEN AND HELL
23 Minutes in Hell by Bill Wiese
AUGUSTO MAQUENGO 3: SOUL TIES
How God Showed Me That People go to Hell for Blowing Hair
My Encounter With Lucifer And Victory In Jesus By Augusto Maquengo — Series One
Vision of A Sister Covered in God’s Glory
12 HOURS IN HEAVEN
The Fear in Hell by Zipporah Mushala
Witchcraft confession in Yoruba Language by a Cotonou Pastor Part 2
Testimony Of A Former Devil Worshiper - Nonkoliso Ngeleka
Witchcraft confession in Yoruba Language by a Cotonou Pastor Part 1
ABIBU NDJOKI KENNEDY : SAVED AT THE LAST MINUTE: I SAW HEAVEN AND HELL
THE VALLEY OF SUICIDE IN HELL AND MY NEW LIFE IN CHRIST SANTIAGO, PANAMA by ADELA JIMENEZ
Shocking Confession Of A Former Church Of Satan Member By Steven Kofi
Post Views: 321